Understand aging - in the cell culture

okay this will be messy. I seem to understand several things...


In cell culture cells divide until they adhere to media (contact inhibition)
Then they need to be passaged (dish changed, contacts cut) to start dividing again.
With repeated passage, human cells in culture reach senescence after about 50-60 doublings, This is the Hayflick limit, caused by telomere erosion.
Around year 2000 it was widely researched what happens when telomeres are restored by expressing human telomerase in the cells (hTERT).
In some cultures a new, extended cell doubling limit was reached and to overcome this the p16/rb pathway had to be disrupted

But in other cultures this limit was not present, Telomerase alone was enough to immortalize cells

However cells immortalized by hTert only showed premalignant growth (accelerated growth,no contact inhibition) in some cultures

"Growth of three independent mass cultures was uniform for ∼150 PDLs after telomerase infection, followed by a progressive acceleration of growth in two of three cultures. Expression of p16INK4A was significantly elevated in the immortalized cells but gradually disappeared during the accelerated growth phase. This alteration correlated with loss of the contact inhibition response and conferred the cells with sensitivity to H-Ras-induced transformation"

However other research found no such effects
http://s3.amazonaws.com/academia.edu.documents/42760130/Morales_C.P._et_al._Absence_of_cancer-as20160217-3135-ewf9bc.pdf?AWSAccessKeyId=AKIAJ56TQJRTWSMTNPEA&Expires=1474663740&Signature=zysMp%2F%2FpvbcbABlRRw9i9U1qIdE%3D&response-content-disposition=inline%3B%20filename%3DAbsence_of_cancer-associated_changes_in.pdf

This research is the key to understand aging
Epigenetic clock analyses of cellular senescence and ageing
http://www.impactjournals.com/oncotarget/index.php?journal=oncotarget&page=article&op=view&path[]=7383&pubmed-linkout=1

This might be the key. In some cell cultures cells age more rapidly so they become constrained by the p16Ink4a. p16ink4a is normally silenced by DNA methylation but as age associated hypomethylation progresses , p16 expression increases thus limiting cell division. Later as hypomethylation progresses and genetic instability grows, some cells overcome p16 limitation and become precancerous.
In other cultures cells do not age in an accelerated fashion, so they can freely proliferate when telomere erosion is not a limiting factor anymore.
There must be some factors in different cell cultures that facilitate slower or faster cellular aging!

Mice are also interesting. Mice have much longer telomeres than humans, but live much shorter lifespans.
Mouse cells in some culture also stop dividing waaay before reaching the telomere limit.
http://www.biolchem.ucla.edu/labs/Tim_Lane/login/StemCell_pdf%20files/Wright.pdf
Telomere dynamics in cancer progression and prevention:
fundamental differences in human
and mouse telomere biology


My conclusions:
telomeres are the red herring of aging. Telomeres serve as means to prevent differentiated cells to divide too much, to control tissue mass and  prevent accumulation of mutations.
The tissue stem cells express telomerase in a limited way so that they can escape the Hayflick limit. If it wasnt this way we would run out of blood cells and intestinal epithelial cells pretty soon as these cells have a high turnover.
But what really counts is the epigenetic clock. It makes stem cells age, so they lose plasticity and regenerative capacity. p16 becomes more and more expressed with aging cells (epigenetic pattern is inherited by differentiated cells from their parent stem cells) causing senescence and tissue erosion.
In cell culture this process can be mimicked with different speeds of biological aging depending on culture media. Lot more research is needed on culture media. Trial and error is not enough. The cellular environment is very important!


Update:
This is the last research I could find on p16/TERT interplay.

Epithelial cell migration happens during embryogenesis. During embryogenesis and young age, the epigenetic clock (developmental program) ticks much faster. Thus certain cell cultures (plastic with serum) mimick embryonic environment and makes the cells age faster. The cell culture with feeder cells - on the other hand - mimicks adult tissue environment thus the epigenetic clock ticks slower.
See Figure 6 for the logarithmic nature of the epigenetic clock
https://www.ncbi.nlm.nih.gov/pmc/articles/PMC4015143/pdf/gb-2013-14-10-r115.pdf
Methylation levels change a lot near birth, much less in adulthood if we apply the embryonic methylation shift in later age, we got a lot more aging in calendar years. 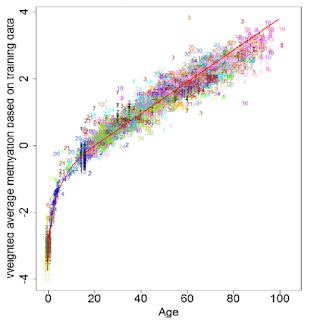